This is an article written by Karl Ludvigsen for the April 2006 issue of Hemmings Sports and Exotics. Normally I wouldn't copy something wholesale into this site, but in the years since it was originally written the Hemmings site has lost the attribution to the author, and only shows it as "By Hemmings Contributor". Karl's name appears nowhere. This site degradation makes me fear we may lose this piece of history if I do not copy it here.

Please though, recognize that this is originally written by Karl Ludvigsen and published by Hemmings. For now, the web page still exists here: https://www.hemmings.com/stories/article/daytona-dramas

The article isn't specifically about the Formula S, but the car and some of the people around it feature prominently in the story.

Have I told you the one about being named to drive a Ford GT40 at Daytona? It all started when I met William Wonder. Bill was a wiry, wry flight engineer with American Airlines and a passionate enthusiast of cars and racing. His job with American allowed him to test-hop the planet in search of cars and know-how. It also gave him time off to prepare cars for competition-at which he was extremely capable-and race them.

In 1956, Bill was stepping up his racing. Having acquired a 200S Maserati, he needed to sell his Bristol-powered Frazer Nash Mille Miglia. This was a car I'd long admired, so we arranged to swap it for my Alfa Romeo Giulietta Spyder-a car that Bill could much more easily sell. We kept in touch, and by the early 1960s Bill was working on other people's cars in addition to his own on the floor above Del Mentnich's body shop in Locust Valley on New York's Long Island.

In the meantime, Bill Wonder raised his racing game. He acquired a Huffaker-built Genie with Ford power for the SCCA's Group 7 racing and, the jewel of his stable, an early Ford GT40, the Shelby-entered car that was driven to victory in the 1965 2,000 Kilometers of Daytona by Ken Miles and Lloyd Ruby. Both were immaculately maintained and liveried in his trademark deep maroon. I acted as team manager for Bill's effort in the first-ever 24 Hours of Daytona in 1966, when he was partnered by Herb Wetanson. A wheel problem sidelined our effort during an extremely cold night in Florida.

In 1966, Bill and his sidekick Don Lefferts maintained my Maserati A6GCS for racing in the VSCCA's events at tracks like Lime Rock and Bridgehampton. The Maser and I made a quick pairing, pretty much the fastest in the Club at that time. Bill Wonder must have taken note, because one day late that year he raised the idea of my co-driving with him at Daytona in 1967. This was a sensational idea. Racing a GT40! I accepted with a frisson of dread and delight.

There was only one problem: Though I'd been to the odd SCCA driver's school, I possessed nothing resembling a current international competition license. My best shot at one was a driver's school at Marlboro, Maryland, in November of 1966. A good result there might suffice to get my ticket. For this I needed a current-model racing car-something else I conspicuously lacked.

The solution came from Hank Rudkin of the Pepperidge Farm Rudkins. Tall, sandy-haired Hank was the backer of an effort in Seymour, Connecticut, to build a Saab-powered single-seater called the Quantum Formula S. This was a successor to an earlier sports-model Quantum Saab that I'd tested at Lime Rock, a car that John Fitch and I judged only marginally controllable.

The Formula S was a big step in the right direction, a trim little racer with a twin-tube frame that served as its fuel tank and a ring-a-ding Saab two-stroke in the back giving 85 horses. Saab components were ingeniously adapted to its parallel-wishbone suspension, rack-and-pinion steering, drum brakes, wheels and four-speed transaxle. With a car buildable from a base kit priced at a mere $1,347 FOB Seymour, the ultimate aim was to establish Formula S as a one-make SCCA category.

With Rudkin's manager/racer Bill Kerrigan, I arranged to borrow his demonstrator Formula S complete with trailer and tow car. I dragooned fellow General Motors wage slave Matthias Klinke into accompanying me to Marlboro for the school. We wheeled the red racer through tech inspection but then had the damnedest time getting it to run. The solution lay in isolating an ignition wire that was shorting out against the frame. With that sorted, the super-tuned Saab burst into raucous life.

All went well at the school. I had a blast driving the Quantum at Marlboro, where a small oval combined with a tight road circuit to create a demanding track. We walked the track, did our usual solo bits and then had a race at the end in which I didn't embarrass myself or the Saab.

Was this enough to get the license I needed to race at Daytona? Well, no. Displaying a high degree of common sense, the authorities decided that I'd actually have to drive in some races before they'd punch my ticket. With no races available over the winter, I was stymied.

Bill offered the drive to Ray Caldwell, the New England driver-engineer then making his name with his Autodynamics Formula Vees. Wonder and Caldwell made a good pair. They upped their qualifying pace at Daytona and completed the 1967 24 Hours in eighth place and second in class-an excellent result. They teamed up again for Sebring but retired with engine trouble.

As for me, I had a great Daytona in 1967. I was close to the Ferrari people in those days, including drivers Lorenzo Bandini and Chris Amon, engineer Mauro Forghieri and team manager Eugenio Dragoni. I was in their garages as the dedicated Maranello mechanics meticulously prepared their two 330P4 Ferraris for the race. I was trackside when they rolled in tandem across the finish line after vanquishing the might of the Ford Motor Company. And I joined their dinner when they celebrated a memorable victory over the Blue Oval. Driving would have been good, but this wasn't bad at all.

These two photos are believed to be of Karl in the Formula S he borrowed from Hank Rudkin. Folks familiar with the track will recognize Marlboro Raceway.

Not my photo. This was shot by Bill Dobbins and scanned by Steve Knoll. 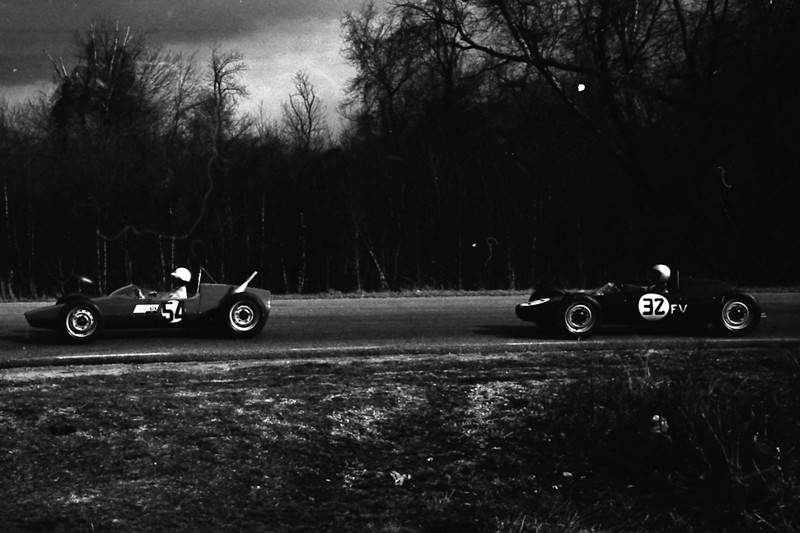 Not my photo. This was shot by Bill Dobbins and scanned by Steve Knoll.